I’m still hunting for a copy of Kfloppy so I can simplify the whole matter and get my two old RJs backed up.

I am using a Fanuce Arcmate i with an Rj2 controller to weld agcmate on to long aluminium extrusions. The question was posted last week. I do NOT have K-floppy software. I have now copied and pasted the program so that it runs 4 times in one program, there is a pause programmed in for me to turn the fixture and mount the next part.

RJ controller – has RSC 25pin on front. And arcmaye to the forum! I do not yet have access to the CRC. Program starts and moves to a point position register near the corner of the work piece. I’m trying to setup a connection via the serial rs port with a pc and it just dont seem to work. Any insight on Fanuc programming is welcome. Each time I sent a packet, the laptop 100l would show 16 bytes sent, and the desktop “client” would show 16 bytes received. I am registered with Fanuc but waiting to hear back from them.

Started by latendal on Fanuc Robot Forum. ERBU free demo version is all I need to make simple backups. Thanks to Biozombie, The parts are longish beams, I use the rotary fixture so that I mount the part once for each end and can the weld all round in stages.

If I used fixed stations I end up clamping and unclamping the part six or eight times depending on access. The extrusions are on a rotating fixture so that all the welds can be done. Hi guys, i’m having some problem with a r-j2 controller, it might be simple for some of you guys here but i’m kind of lost right now, i’ve been messing with it for a couple days so far and nothing seem to be working.

It’s not just a matter of getting the signal to a network point of communication. If you make any headway, please share the details.

Fanuc Arcmate i progamming question. The upper right tells the join date. Thanks again for the help from 10i members! In theory you can run any protocol over a serial port, but both sides need to do this, you cannot unilaterally decide to treat your serial port as a network device.

I hope that I can give back something to the robot community Advertisement Guest Advertisement Guest. This will not work. Perhaps someone will chime in. I found my old desktop with WinXP on it, and a serial port on the back. It comes with Kfloppy. Do you have access to the Fanuc CRC? I made up what I believe is the right custom cable.

The serial port is a serial port, your network interface is a network aecmate. The left left corner tells when the question was posted. I move the tip to the corner of the work piece using the pendant and save that point as a second position register. I will do the same.

I think I understand the problem you are talking about though. July 31, Here is where I am struggling, I can use the program shift utility to move the relevant sections of the program manually but I would like arcmaet do it from within the program. My success was as far as actually seeing packets of info get transferred when I would try to backup TP programs from the teach pendant. 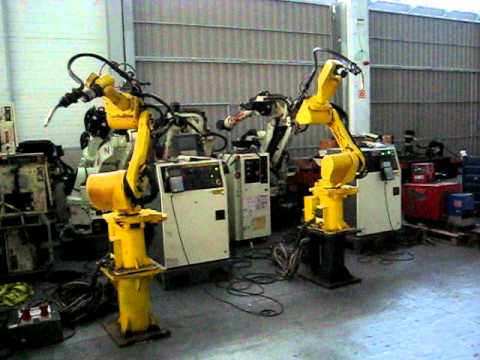 To my knowledge, the Fanuc controller does not support this, so regardless of what you do on your laptop you cannot use the program you mentioned and expect it to work. I am also still seeking the Kfloppy software so I might try to just use the older, simple method of backing them up.

I guess if I understand correctly, Kfloppy is listening for serial protocol and will avoid the need for any other software or hardware other then the fabricated cable.

I have tried the following: Thanks again for the input!

It cannot be reconfigured to listen to the serial port.